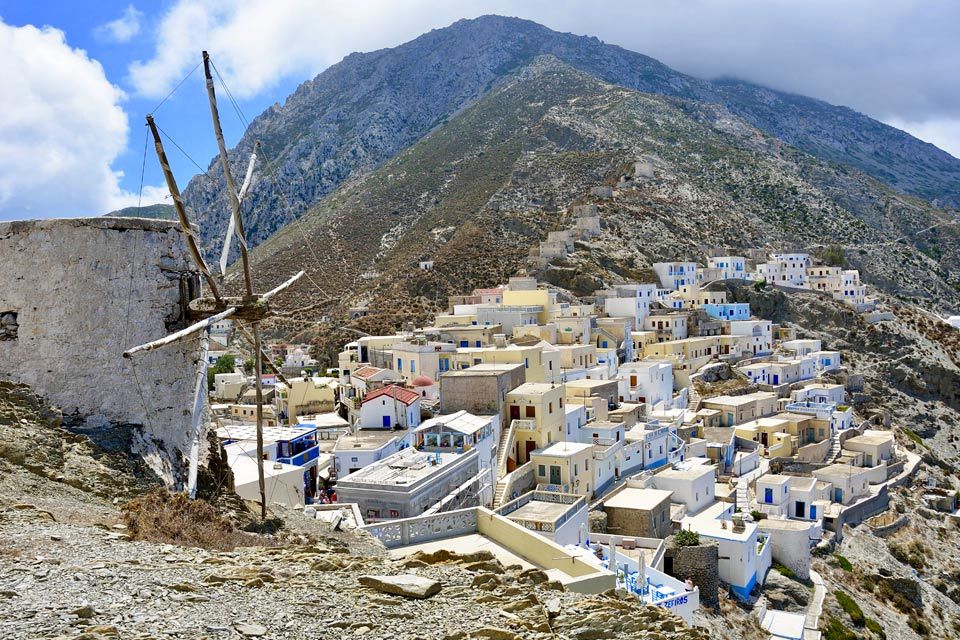 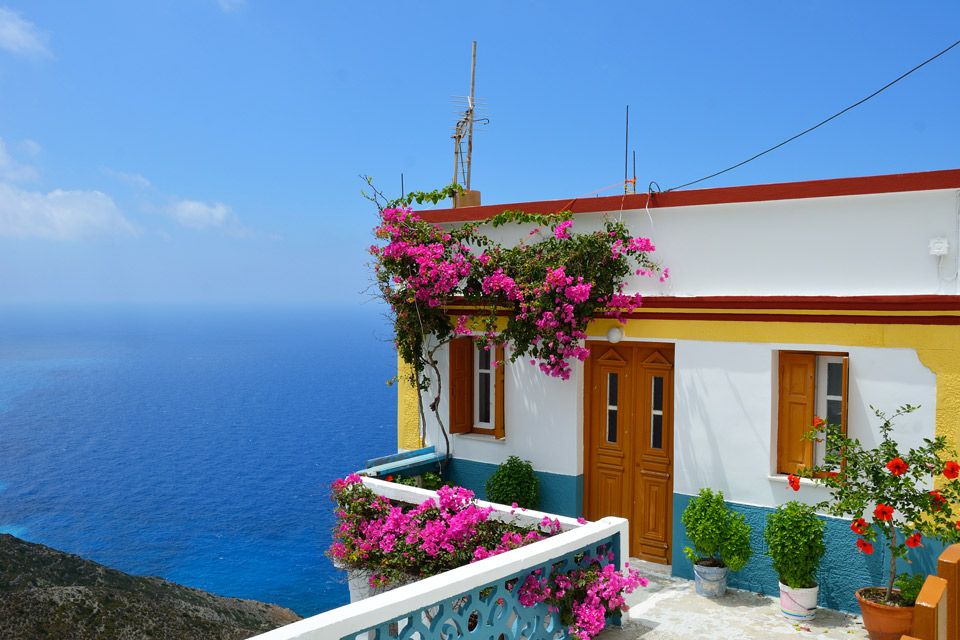 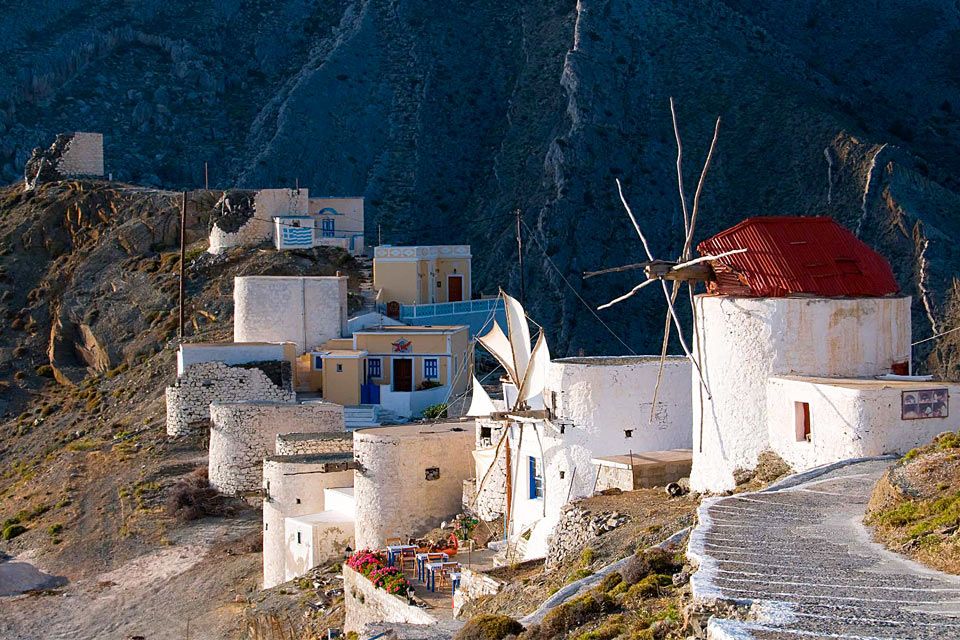 The village of Olymbos is located in the northern part of the island of Karpathos, which in turn is part of the Dodecanese complex of islands in the southestern area of the Aegean Archipelago in Greece. For those site visitors who are GPS, navigation, and geography savvy and interested, the approximate coordinates of Olymbos are: 35° 44′ 29.03″ N, 27° 26.08″E. Just don't send a GPS-guided bomb, please!

It is certain that the village was named after the notorious tall mountain of the mainland, Olympus, home of the 12 Gods of ancient Greece. This is because the village is built on the side of the equally tall Mt. Profitis Elias. Unlike the famous mythology mountain whose name is of masculine gender, “Olymbos”, as it pertains to the name of the village, is of feminine gender. Those who speak or know a little about the Greek language will know how different those will be. 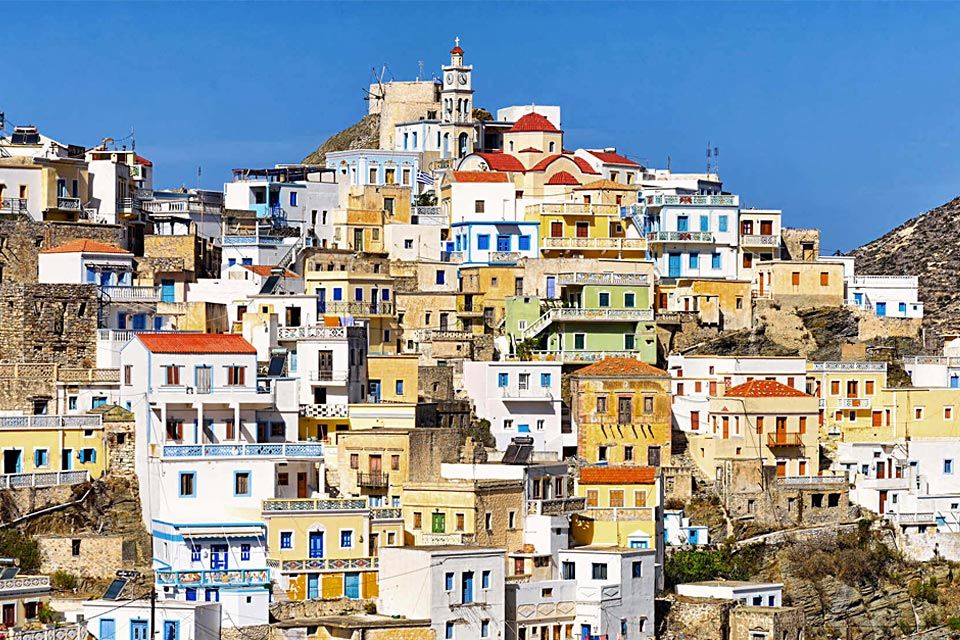 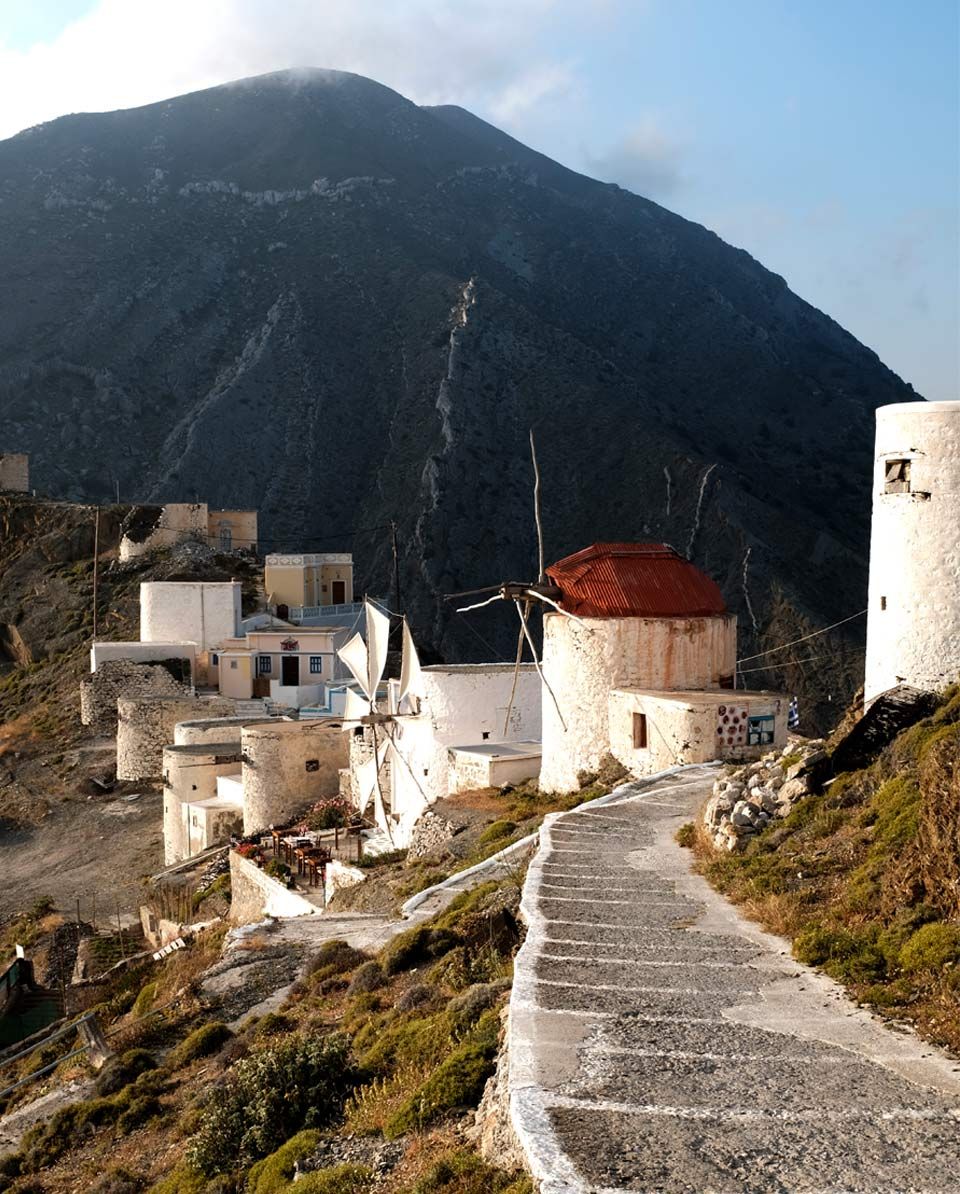 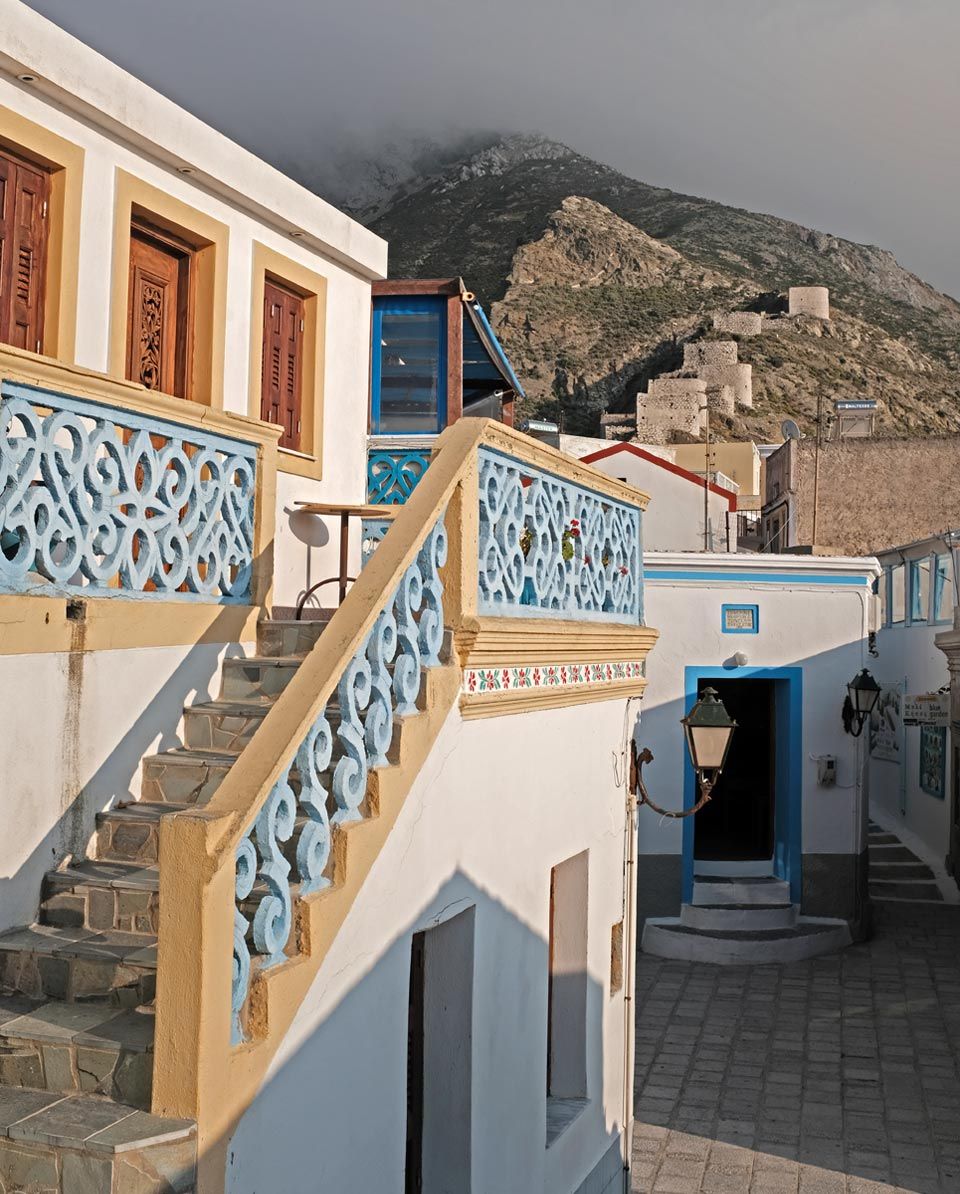 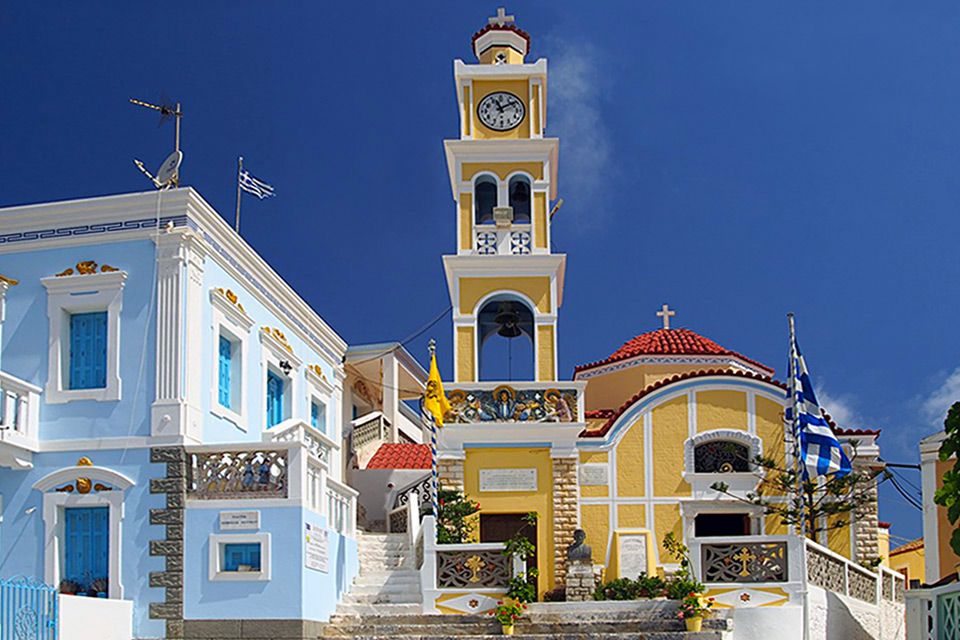 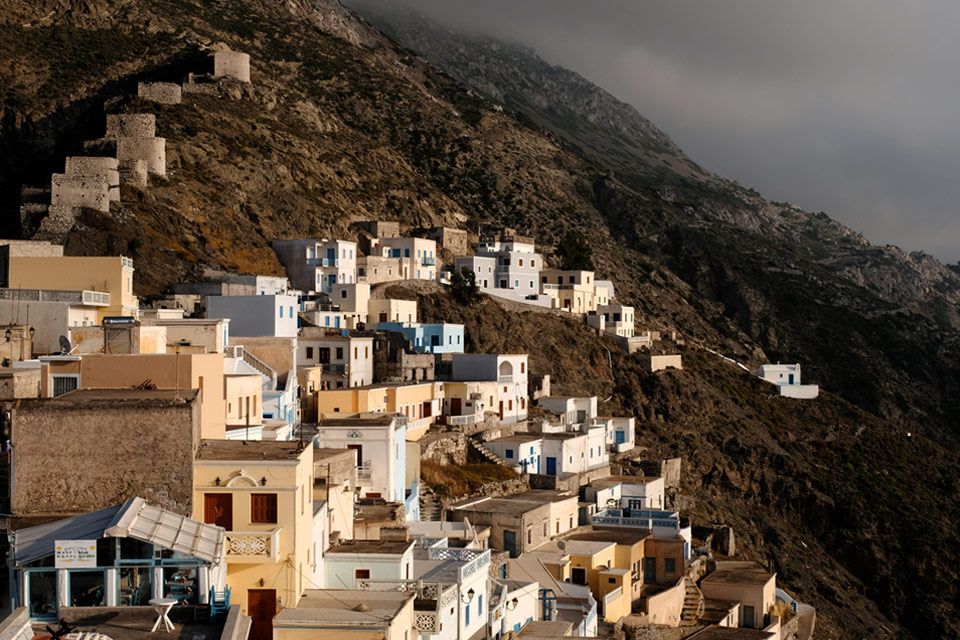 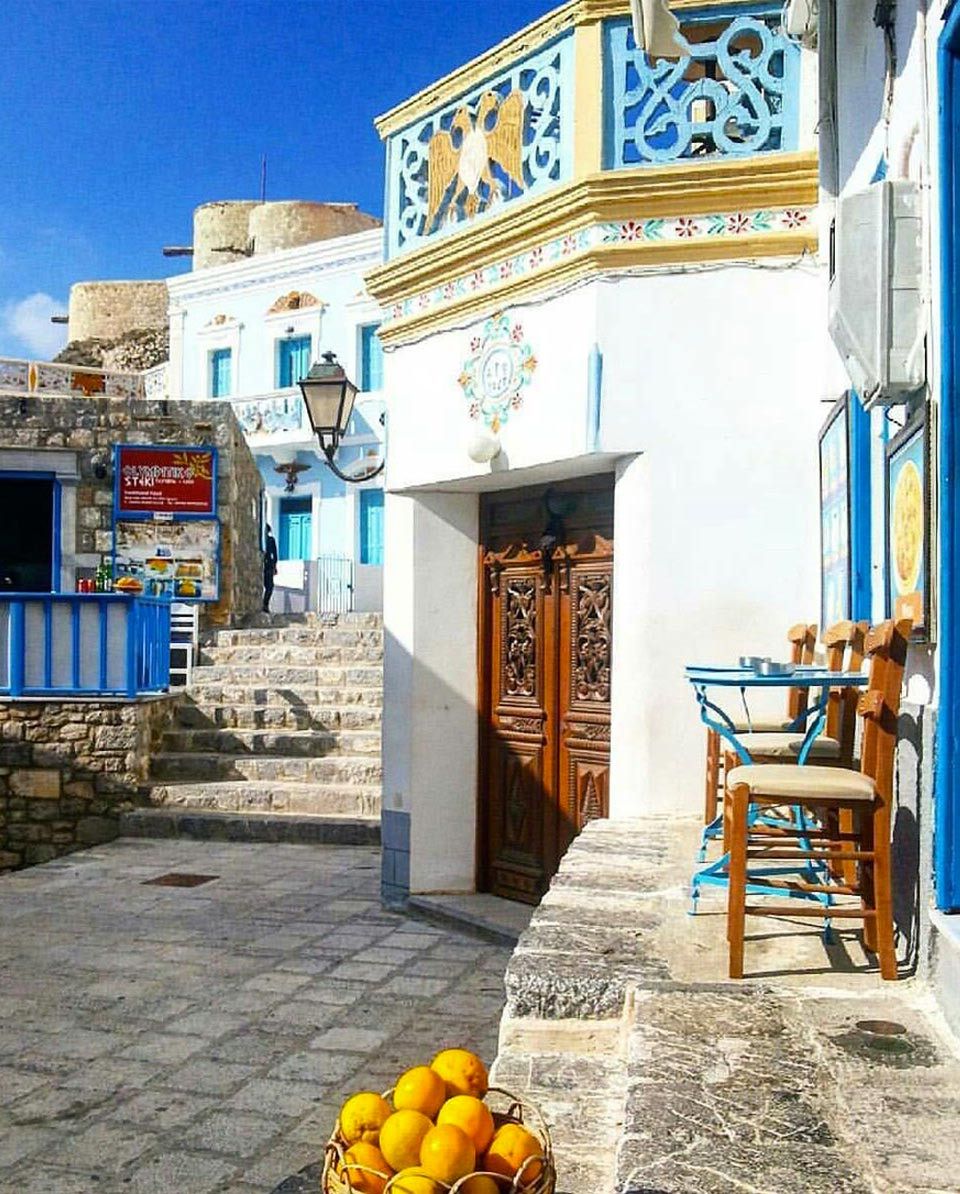 The general region of Olymbos lies north of Mt. Kymaras and includes the northernmost part of the island as well as the island of Saria, which is agricultural in nature. Saria is separated by the mainland by a straight of about 100m wide at its narrowest. The region of Olymbos is comprised of mainly mountainous areas totaling up to 37 km2 but many areas are covered with woods or offered for cultivation and livestock feeding.

Fertile land areas include the regions of Avlona, Achorthea, Pei (pronounced as “pay”) and Koilios in Olymbos and Pyla, Ammoe, and Nappa in Saria. Those lands produce olives and olive oil, grains, fruits, vegetables, and grapes, used mostly for making excellent local wine. An interesting element of the local geography is the partition of the region by the sea. The region is surrounded by many natural harbors and bays which offer habitats for wildlife, sealife and protection for people and their boats.

The major production center of the Island

The diligence of the inhabitants in the years past made it possible for virtually every inch of soil to be cultivated no matter where it was located. During the years of World War II, the region of Olymbos was able to support the population of the whole island by producing the majority of grains, flour, fruits, vegetables, dairy products, wines as well as items of other-than-nutritional value in the life of inhabitants such as clothing etc.

The windmills of Olymbos were the major production center of the community producing flour for the precious bread. There are about 75 windmills remaining, in conditions ranging from fully operational and still producing flour to ruins down to Earth. There are currently 2 windmills which produce flour and it would be an extraordinary experience for a visitor to witness the process of wheat and barley grinding.

There is no question that the Community of Olymbos in cooperation with the Greek Government and the European Union should take steps to prevent further deterioration of those windmills. They have played a major role in the history of the community and should not be left to fade away while fighting mother nature’s weathering and erosion.